Controversy Over Dancing Bears at Mass 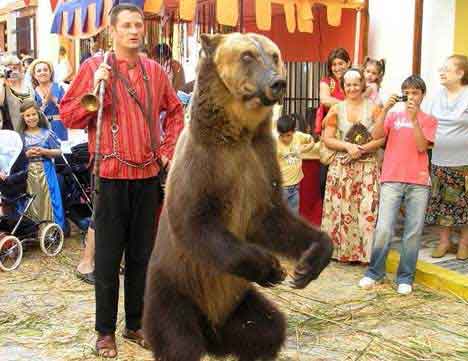 Allium Cepa News Network (ACNN) has just received a breaking story from the Vatican.  A motu proprio has just been issued by the pope. This much anticipated document finally ends the contentious debate regarding the use of dancing bears in the Novus Ordo liturgy.  Before we proceed, however, a brief history of liturgical bears is in order.

The first reported use of a dancing bear in a liturgy came on August 12th in Berkley, CA.  On that day, Fr. Kevin Smith, pastor of Blessed Karl Rahner Catholic Community, introduced a live dancing bear into the sanctuary during the 10 am Mass.  The addition came as a shock to some of the parishioners.  Parishioner John Hart stated, “I knew the Vatican issued a statement on the use of bears in the liturgy, but I must say, I never expected the bears to actually dance during the Mass.”  Other parishioners had more positive reactions.  Animal rights activist Robin Byrd remarked, “This is a glorious day in the history of the Church.  Finally these bears can share in our joy of the Risen Lord, a Lord not just of people, but of bears as well.”

Since that fateful day, the use of dancing bears in the liturgy has spread like wildfire.  Other pastors soon picked up on the practice and started placing dancing bears in the sanctuary.   These pastors claim that having bears dance during Mass is completely within the bounds of the Vatican document, Ursa Sanctum.  While experts agree the Vatican document does allow bears in the sanctuary during Mass, they are split as to whether it allows the bears to dance during the liturgy.  The disputed passage of Ursa Sanctum is as follows:

As a result of the welcome and much needed focus on the plight of bears as our brothers and sisters in God’s creation, many pastors have petitioned the Congregation for Wildlife and the Eucharist (CWE) to allow for the use of bears in their celebration of the Lord’s Supper.  While a worthy and worthwhile request, this Congregation must balance the respect due to bears and the dignity and reverence due to the Holy Eucharist. Therefore, it is the decision of this Congregation that bears may be allowed in the sanctuary during Mass, but only to the side of the altar.  It must be noted, however, that although bears are God’s creation, they are sadly not yet fully reconciled to man due to the terrible results of the Fall.  It is hoped that one day soon man and bear may live in full communion as intended by our Creator.  Nevertheless, for purposes of safety, liturgical bears must be placed in plexi-glass cages.  However, every effort must be made to ensure that the cage is large enough so that the bear’s free movement is not restricted.  It is not the intent of this Congregation to invite bears into the sanctuary only to induce claustrophobia or otherwise agitate them.

Liberal clergy immediately seized on this paragraph of Ursa Sanctum,interpreting it to allow for trained bears to dance during Mass.  “Clearly one sees the intent of the CWE in this statement,” said Bishop James Adams of Park City, Utah.  The Vatican Congregation specifically states that the bear’s “free movement” should not be restricted during the Mass.  I ask my opponents, what is dancing if not “free movement?”  Furthermore, nowhere in the document does the CWE state that bears CANNOT dance during the Mass. I think that is very telling.”

Conservative commentators are not so convinced.  Conservative Catholic luminary George Weigel was asked for his thoughts on the matter:

Obviously, what one sees here on the part of Bishop Adams is an attempt to use the words of Ursa Sanctum as a pretext for his own conception of man-bear relations in the context of the Holy Sacrifice.  Instead of reading his Excellency’s own interpretation into the document, he should, with all due respect, study and unpack the profound mystery and wisdom present in it.  Ursa Sanctum is not, as many believe, a liberal document.  The CWE here manages to, rather ingeniously; accommodate those on the left who insist on bears in the Eucharist while still maintaining the central focus of the liturgy.

Notice that the CWE insists, quite strongly, that any bear in the sanctuary must be, “to the side of the altar.”  This is to make crystal clear that the Eucharist, and not the bear, is to be the central focus of the liturgy.  A bear that dances would clearly take the focus away from the celebrant and thus the Congregation cannot possibly contemplate this as an option.  Also notice that the document does not give carte blanche permission for any animal to be permitted in the sanctuary.  This is very significant, as many liberal activists have called for a variety of wildlife to be present in the sanctuary beyond just bears. Therefore, we can see that the CWE has managed to appease the vast majority of liberal activists by allowing bears only. Thus the CWE has both avoided a potential schism and marginalized the remaining hard line liberals.  It really is an amazing act of tactical genius.  When one truly studies Ursa Sanctum, as I have, it is clear that it delivers a striking blow to liberal Catholic activists. This document is indeed a definitive victory for those who carry on the true legacy of Vatican II.

Later, Cardinal Gerhard Mueller, head of the CDF, was asked to comment on Traditionalist criticisms that bears have no place in the sanctuary at all. According to Traditionalists, Ursa Sanctum has no binding authority whatsoever. Further, they say that this decision by the CWE will surely doom the Novus Ordo Mass to complete irrelevancy and lead to the continued breakdown of the Catholic Faith.  Cardinal Mueller responded to Ursa Sanctum’s critics:

These are preposterous notions which demonstrate the myopic tendencies of many of those who dwell in the so-called traditionalist movement.   If it were up to these integrists, women and laypersons would also be excluded from the sanctuary and thus unable to fully and actively participate in the Mass.  This camp would have us return to past notions of exclusion and antiquated speciesism.  In the end it all comes down to authority.  It is clear that these people have no respect for the authority of the CWE and thus, have no respect for the authority of the Pope on whose behalf the CWE operates.

These recalcitrant integrists should welcome the addition of the bear to the sanctuary as the bear symbolizes God’s justice on the unrighteous.  If the integrists studied their sacred scripture, they would know it was a bear who, in 2 Kings 2:24, came out of the wood and destroyed those who had been mocking the prophet Elisha.  Furthermore, the bear symbolizes the coming peace among all of God’s creation. Integrists would do well to remember the words of Isaiah (11:7), "And the cow and the bear shall feed; their young ones shall lie down together."

Now, after months of anticipation from those on all sides of this issue, the Pope has just issued a motu proprio on the question of dancing bears that will hopefully, once and for all, settle the matter.  The relevant part of his motu proprio, Tripudium Ursae is as follows:

It has come to my attention that in many places bears have been placed in the sanctuary during Holy Mass. This practice is said to be in accord with apparent permissions given in the document Ursa Sanctum issued by the Congregation of Wildlife and the Eucharist (CWE).  Furthermore, it has been reported that in some churches these bears actually dance during the Most Holy Sacrifice. I want to state publicly that the document Ursa Sanctum was published by the Head of the CWE on his own authority and was never properly submitted to the Holy See for final review before publication.  Thus, the introduction of bears into the sanctuary has, in principle, always been prohibited and has never been officially permitted in the Church.  In conclusion, it must be said that the current Missal of the Roman Rite does not allow for the presence of any animals in the sanctuary.

While recognizing this fact, certain pastoral considerations must be taken into account.  As a result of confusion, many faithful are now attached to the “Bear Mass” previously allowed, misguidedly, by bishops and pastors under Ursa Sanctum.  In sensitivity to these faithful and in order not to cause needless scandal and potential schism, I hereby grant national bishops’ conferences the authority to allow bears in the sanctuary as an option if this practice has become a tradition in their jurisdiction.  If such allowance is granted, however, specific regulations governing the practice are to be published by the bishop’s conference to ensure the bear’s presence in the sanctuary is at all times reverent and does not serve as a distraction to the Holy Sacrifice of the Mass.

As for liturgical bears dancing during Holy Mass, this practice is expressly forbidden. Nevertheless, if at least 30 parishioners in a given diocese are sincerely attached to the “Dancing Bear Mass” they may submit a signed petition to their bishop for such a Mass to be allowed in their diocese.  The local bishop will then examine each petition on a case-by-case basis.  If pastoral necessity genuinely and certainly requires it, permission may in such cases be granted.[1]

[1] The bishop in these cases must ensure that any dance performed by the bear is in keeping with the decorum, reverence, and solemnity of the Holy Sacrifice of the Mass.