A-CNN, 4-24-2015 – Allium-Cepa has just learned that the director of the Vatican Press Office, Fr. Federico Lombardi, S.J., held an emergency press conference this morning. The purpose of the meeting was to announce to the media some particulars about the Missionaries of Mercy that Pope Francis will be dispatching across the globe during the “Year of Mercy”.

Fr. Lombardi opened the press conference with the announcement, “I would like to begin by stating that while this new development from Pope Francis is surprising, nonetheless I am certain that this is truly the ‘aggiornamento autentico’ that the Church needs at this time.”

“This morning while I was having breakfast with Bergoglio… I mean, the Holy Father, His Holiness informed me as he buttered his scone that he felt the best choice of priests to act as his Missionaries of Mercy are those of the Society of Saint Pius X.”

A reporter from La Stampa inquired about the possibility that Pope Francis’ comment might have been misunderstood and that a future clarification will be forthcoming. Fr. Lombardi replied, “I don’t think so… the Holy Father is usually pretty clear at breakfast.”

After calming down the assembled journalists, the Vatican Press Office director continued:

“The pope intends to personally speak with the Society’s Superior General today, Bishop Bernard Fellay, that is, if his secretary can track down his whereabouts.

The Holy Father wants to establish an SSPX- SWAT Team that he can strategically deploy during the Year of Mercy with the objective of wiping out Modernism in the Catholic Church.” A journalist from the Jesuit America panicky asked, “Why would Francis want to do that?!”

“The Holy Father has recently been reading some of the pre-conciliar encyclicals, especially Pascendi and the Syllabus of Errors. He absolutely loves what his predecessors of blessed memory have to say against Modernism and wishes he had read these documents when he was in the seminary. In fact his newest favorite bedside book is Archbishop Lefebvre’s Open Letter to Confused Catholics…”

Responding to the incredulous gaze of the reporters, Fr. Lombardi affirmed, “Yes, I know this may seem strange, but who am I to judge?”

"Hey, dirtbags, and in the Holy Catholic Church?
The Communion of Saints? Well, do ya?" 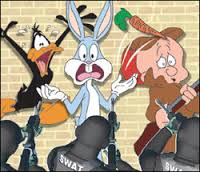 “The Holy Father will be granting the priests of the SSPX- SWAT Team plenipotentiary faculties so that they may licitly and validly administer any of the sacraments wherever they may be deployed; even if the local bishop doesn’t like them. Pope Francis specifically mentioned that he wants to grant these Society priests the authority to revoke any penalties incurred by adherence to heresy, schism, the LCWR, or having a paid subscription to the National Catholic Reporter. While thoughtfully sipping his coffee, the pope also mentioned that he just might extend to the SSPX-SWAT Team his papal authority to excommunicate any heterodox clergy, should they fail to be merciful to souls when given the opportunity to preach Pure Catholic Teaching during the Year of Mercy.”

A-CNN’s own Rome Correspondent, Chris Jackson, inquired, “Father, considering how Modernism has infected every corner of the Church and is firmly rooted in the minds of the mainstream hierarchy, clergy and laity, other than what you have just mentioned, what other corrective tools will the SSPX-SWAT Team have its disposal?”

“The SWAT Team,” Fr. Lombardi answered, “will certainly be well equipped with Cassocks, Altar Missals for the Latin Mass, Rosaries, Breviaries, the Catechism of the Council of Trent, a variety of Sacramentals and Holy Cards. I must admit though, my personal favorite Weapon of Choice is Holy Water, lots of it!”

The press conference was concluded without any further questions. The reporters stampeded out of the conference room and several minor trampling injuries were reported. Fortunately the newly-restored Papal Noble Guard was on hand with their swords to prevent the worst from occurring. The news about Pope Francis’ appointment of the SSPX-SWAT Team as his Missionaries of Mercy became an Internet sensation and several routers in Europe crashed as they were unable to cope with the overload of web traffic.

While Bishop Fellay could not be reached for comment at the Society’s General House in Menzingen, Switzerland, Allium-Cepa was fortunate enough to obtain some words from the gardener, who wished to remain anonymous. When asked what he thought of the recent press conference, “Tis good news and verily I hope that Pope Francis will weareth the tiara when he maketh his official pronouncement from the Petrine Chair.”

The response to the Vatican Press Office’s announcement has varied internationally, though one of the most prominent dissenting voices to Pope Francis’ intentions came from the newly founded HOLPCO: the Holy League Of Post-Conciliar Orthodoxy. The “League” is a conglomeration of neo-conservative leaders headed by Michael Voris and including such personalities as John J. Allen, Mark Shea, Jeffrey Mirus , Karl Keating, Jimmy Akin, and others. A reliable source has told A-CNN that George Weigel’s membership request is still pending.

HOLPCO responded with their “2015 Declaration from the Detroit Warehouse Studio”, a 280 page document that details the “grave mistake” of Pope Francis’ action of allowing priests of the Society of Saint Pius X to freely and validly administer all of the sacraments “without being first required to issue a public apology for not accepting the dogmatic [sic] Second Vatican Council.”

“In keeping with the spirit and practice of collegiality, HOLPCO should have been consulted before Pope Bergoglio announced this decision after breakfast.”

“We must also reiterate with all of our authority as HOLPCO, that the confessions heard by Lefebrvist priests who have not been appointed to the SWAT Team are still invalid because they do not have jurisdiction.”

On page 187, the declaration states even further, that “with the pronouncement of the Year of Mercy and the sending forth of the Missionaries of Mercy, the Society of Saint Pius X cannot claim supplied jurisdiction for its non-SWAT Team members, because the crisis they perceived to be affecting the Church has immediately ceased.”

A-CNN was able to speak with Fr. Lombardi the same afternoon and ask if the HOLPCO declaration was binding for Catholics. “Certainly not: You would think from their document’s tone they were issuing a papal bull! I might also add that HOLPCO does not yet have any canonical approval, either from the Bishop of Detroit, the Congregation of the Doctrine of the Faith, or even my office. I think it would be best if this group took to heart the Holy Father’s sentiment about refraining from casting any judgment of persons.”

Here at The Remnant, humor and Tradition go hand in hand. Subscribe Today!